The understanding of interfacial properties of materials as well as interfacial processes in terms of structural, morphological and compositional changes is of crucial importance in many scientific fields that include chemistry, physics, biology and engineering. Overall, surface science has advanced enormously over the last decades, which is related to the development of a series of new, as well as already existing, experimental methods. For example, recent advancements of atomic force and electron microscopy or photoelectron spectroscopy at modern synchrotron X-ray sources allowed access to previously unknown territories.

Compared to electrons and photons, neutrons are sensitive to light elements, can penetrate deep into matter and provide a direct measure of the magnetic induction in materials. Moreover, the sensitivity to the nucleus allows contrast variation experiments by isotope substitution (hydrogen versus deuterium), which is a key element in soft matter research. The drawback of neutron scattering methods, however, is that the brilliance of neutron sources is limited. This is particularly relevant for small sample volumes or surface scattering studies. Therefore, there is a great need to improve the intensity in neutron surface scattering experiments.

Figure 1. Sketch of the scattering geometry for neutron reflectometry (left) and one-dimensional GISANS (right). Note the sample and Qy and Qz axes are turned by 90° for these two configurations.

We show that fan shaped incident neutron beams allow significantly reduced counting times for the measurement of in-plane correlations. We demonstrate that an increase of intensity of two orders of magnitude can be achieved on the reflectometer Super ADAM by implementing this method.

To increase the incident neutron flux different focusing elements are used. In Super ADAM, the monochromator consists of seven HOPG crystals focusing the beam in the vertical plane. For standard reflectivity measurements the neutron beam is reflected of a vertically mounted sample surface, which allows us to extract neutrons from the full height of the H53 guide. However, this is at the expense of a relaxed vertical resolution. Along the horizontal direction high collimation allows excellent Qz resolution and neutron reflectivity (NR) measurements (see Fig.1 left panel).

In this work we show that the same instrument configuration may be used for studies of lateral structure of surfaces and interfaces via grazing incidence small angle neutron scattering (GISANS). To switch between NR and GISANS experiments we turn the sample geometry from vertical, as used for NR, to horizontal for GISANS (see Fig.1). In this configuration the in-plane resolution is high, whilst sacrificing resolution along the surface normal. As a consequence, we are able to collect high quality, one-dimensional, GISANS data across the Qy direction much faster but gain only very limited information about the depth profile across an interface. Indeed, for the study of single thin films and interfaces this drawback is often acceptable and can be overcome by complementing the GISANS data with reflectometry measurements in the vertical geometry.

Moreover, as we have turned the sample geometry on Super ADAM to become horizontal, we are also able to perform GISANS studies on liquid surfaces! In Fig. 2 we show data taken with silica particles of size 100 nm self-assembled on a heavy water surface. The measurements were done using a water basin consisting of a silica frame glued on a silicon block and mounted on an active antivibration device. The amount of nanoparticles was calculated such that the total projected area of the spheres is equal to that of the water surface, to from a densely packed layer. After integration along Qz and subtraction of the background several Bragg reflections are resolved and can be indexed by assuming a hexagonal dense packed monolayer of 100 nm silica particles. 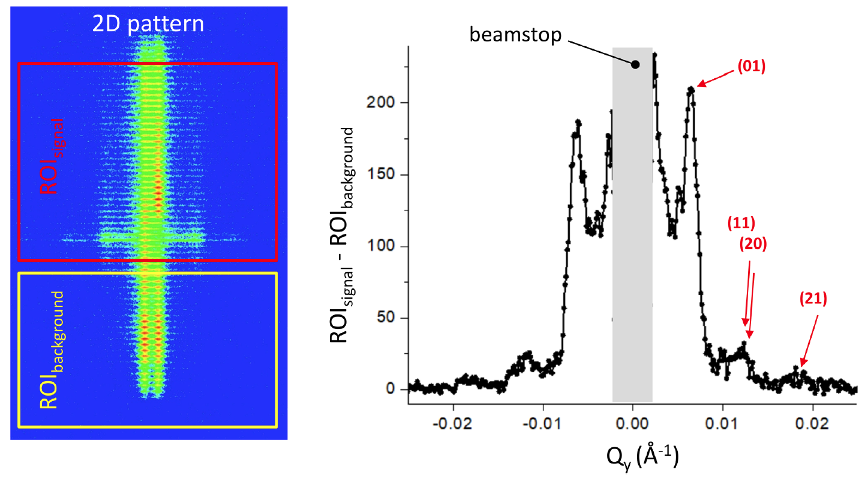 The scattering geometry used in our experiment can be applied at other instruments and should allow to take 1D-GISANS data about 100 times faster. This can make GISANS a standard neutron scattering method as well as it may enable kinetic studies. The future for GISANS using this method is hopefully very bright! Please contact us if you have samples that could benefit of GISANS measurements.

This work stemmed from a collaboration between researchers based at Uppsala University, Malmö University and Institut Laue Langevin.

For the original articles, please visit: